When Charlie Garcia started college, he aspired to become a professional baseball player. But he was young and immature, he said, and he had trouble with following orders and respecting his coaches. Instead, he made a life-changing decision—to join the U.S. Marine Corps.

“I learned discipline, and I’ve been able to mature a lot more and make better decisions in my life,” said Garcia, who has served as an active-duty Marine for about a decade. “The military shaped me into a better man.”

Garcia now aspires to become a lieutenant colonel in the Marine Corps. When he retires from the Marines, he said, he plans on returning to civilian life—with the help of his new Fordham degree. This August, he will graduate from the School of Professional and Continuing Studies with his bachelor’s degree in information technology and systems.

A NYC Native Who Grew Up in the Dominican Republic

Garcia was born and raised in Brooklyn. As a child, he always saluted police officers in the street. He considered them heroes and dreamed of becoming a police officer or a member of the U.S. military, he said. But when his father was unexpectedly deported to the Dominican Republic, 10-year-old Garcia put his dreams aside. 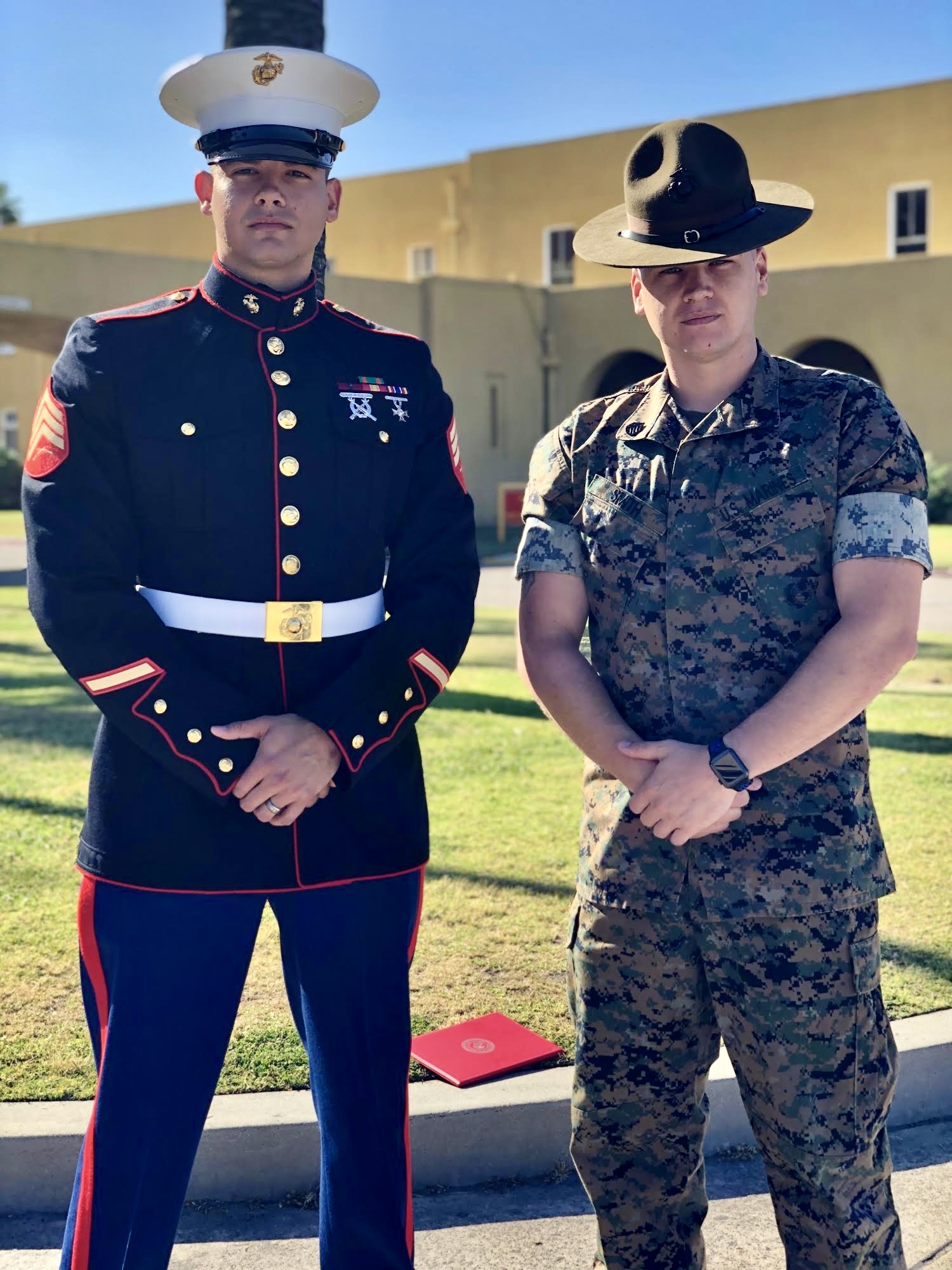 “I left behind good friends, and life in the DR was not what I was expecting, especially coming from New York,” said Garcia, who lived in the DR until finishing high school. “It was challenging, but it prepared me for life ahead and made me a tougher person overall.”

After high school graduation, he returned to New York City to attend the Globe Institute of Technology and play collegiate-level baseball. But he said it wasn’t easy to balance sports, school, and a full-time job. He dropped out of school before graduating and joined the Marine Corps in 2012.

Garcia also worked as a Marine recruiter in Brooklyn. One of his favorite memories as a recruiter was participating with his fellow Marines in the Tunnel to Towers Race in New York City, an annual run that honors the final route of a fallen firefighter on 9/11.

“It not only represents the Marine Corps, but also New York and the United States,” Garcia said. “Being together and having all the civilians cheering us on was very powerful. I still have my running badge number with me.”

An Officer in Training and Aspiring Cybersecurity Specialist

For many years, Garcia has served as an enlisted Marine, with the goal of becoming an officer. But in order to become an officer, he needed to earn a college degree. In 2019, he was selected to join the Marine Enlisted Commissioning Education Program (MECEP), which allows select active-duty Marines to serve in the military while attending a four-year college full time. 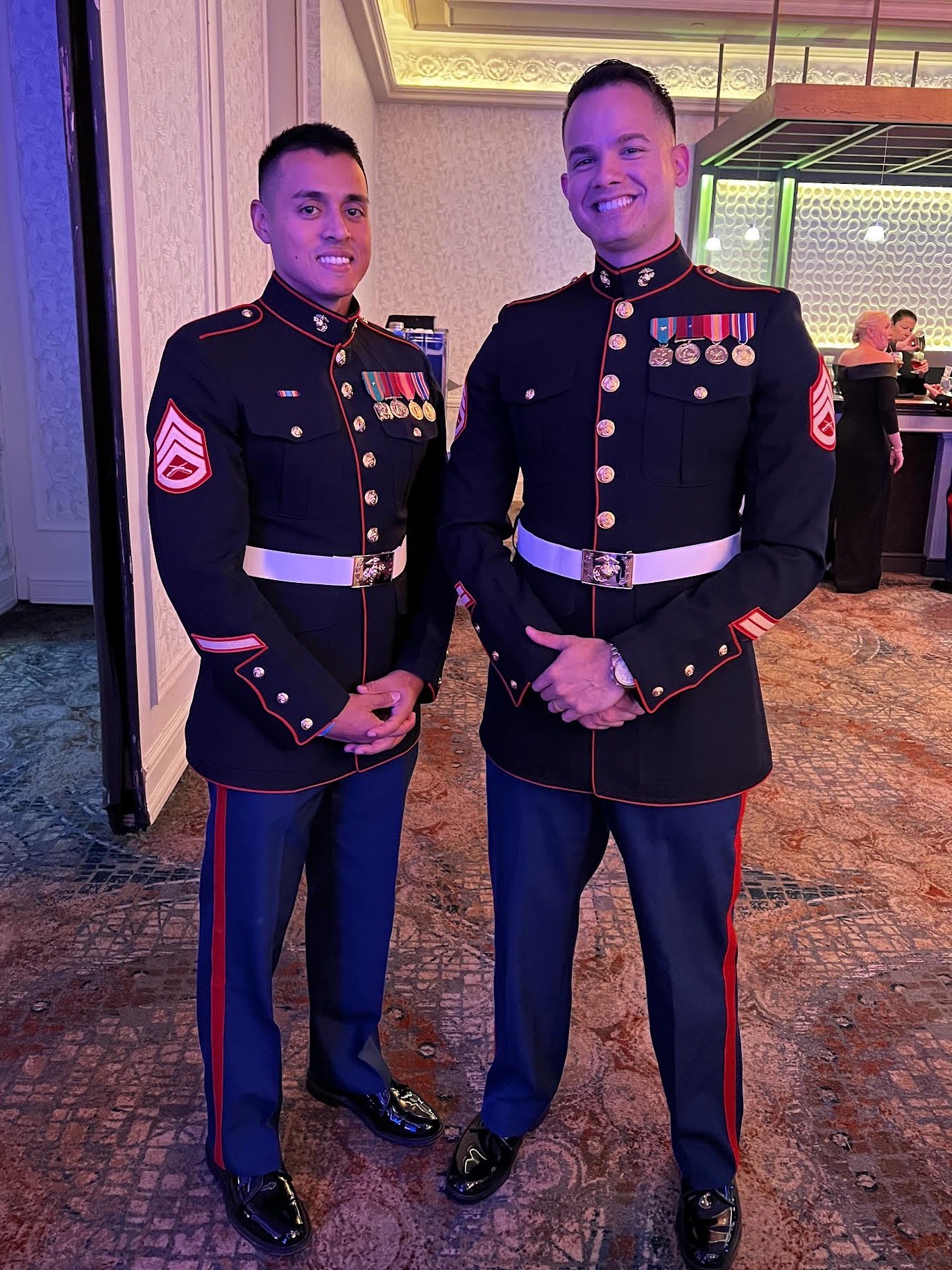 Garcia with Staff Sergeant Arroyo, another Fordham PCS student in MECEP who will graduate this spring

“This program allows me to pursue my education, to better myself, and ultimately, to become an officer and serve in the fleet Marine force, where I can better serve my military branch and become a leader among the enlisted ranks,” he said.

In 2020, Garcia enrolled at Fordham and its Navy ROTC program. Over the past two years, he said he has learned to think outside of the box and gained valuable networking experiences. His uncle who works in IT inspired him to study information technology and systems. Now he hopes to also earn a master’s degree in cybersecurity and specialize in that field in the Marines.

Upon graduation, Garcia will become an officer in the Marine Corps. He said he hopes to spend at least another decade in the Marines and then retire from the military. What awaits him is life as a civilian—and the ability to give back to his community full time.

“I struggled as a kid, seeing my dad get deported. So when I think about my kids and others who may be struggling and unable to see a way out, I want to give them hope,” said Garcia, now a 32-year-old father who lives on Long Island with his wife and their three children. “I reach out to young individuals I recruited and see how they’re doing; I try to show them different programs they can participate in or push them to further their education.”

‘What It Means to Succeed’: A Mentor for Young Marines

Kevin Dewaine Leonard, a retired master sergeant who was stationed with Garcia in New York from 2015 to 2019, described Garcia as a family-oriented man. (Their families are close, and their children have trick-or-treated together during Halloween.) That same dedication toward his family has extended to his brothers and sisters in the Marines, said Leonard.

Garcia took young Marines under his wing, especially teenagers who were living away from home for the first time, said Leonard. There were other higher-ups around, but it was Garcia who took the initiative to organize physical training sessions for the young Marines, work out with them, and get them in shape.

“We never had a situation where a Marine failed a PT test or didn’t meet their development milestones because Garcia constantly had his hands on the pulse with those guys. And his training was effective. When the unit got called up to deploy in 2018, we didn’t have any Marines who weren’t in shape or ready for the task at hand. Sergeant Garcia made sure that those Marines were ready,” Leonard said.

“Garcia was willing to work and to show those Marines exactly what they needed to be successful and to advance within the Marine Corps,” Leonard said. “He showed the Marine Corps what it means to succeed.”

Garcia with other MECEP Marines in New York City