skip to main content
Return to PCS
You are at:Home»Fordham News»Drawing from Her Own Life, a Social Worker Helps Clients Find Their Way
Burke was the student speaker at PCS’s commencement ceremony for 2020 graduates. Photos by Chris Taggart

Margaret Burke, the 11th of 12 children and one of two who earned a college degree, is now a two-time Fordham graduate and a mental health professional whose patients have experienced trauma that remind her of her own.

“I exemplify a PCS student: mature, older with lived experience, someone who came to Fordham to add to their education toward starting a new career,” said Burke, a graduate from both the School of Professional and Continuing Studies and the Graduate School of Social Service, in her graduation speech. “Fordham was able to help each of us see our experience, even our adverse experiences, from a universal perspective, helping us turn all those experiences into viable skills and insights we can use to help others.”

Burke was born into a large family on Long Island. Her father was a decorated World War II veteran and a salesman who worked his way up in the garment industry until he owned his own textile mill. At age 46, he suddenly passed away from a heart attack, leaving behind his wife and their 10 children, including 6-year-old Burke. Over the years, the family has dealt with significant trauma, including alcoholism and suicide. Burke herself is in recovery.

Burke dropped out of high school and followed in her father’s footsteps in the garment industry. She started working as a receptionist for a dress company and became a sales manager who worked with companies like Victoria’s Secret. But after more than three decades, she realized that the American textile industry was falling apart. Many U.S. businesses had moved their operations overseas, where other countries produced goods more cheaply, and the American mills couldn’t compete. Burke said she was also discouraged after working in a male-dominated field without equal pay for so long.

“I just got so disillusioned,” Burke said, reflecting on her life over a phone call. “I was like, why am I doing this? I’m putting lace on a panty, and how is that helping the world?”

At age 50, she decided to go to college. Burke was on track to become the second of her siblings to earn a college degree. Many of her brothers and sisters had dropped out of high school and found meaningful careers that didn’t require higher education. Agatha became an accomplished chef who worked for David Bouley; Bill was a war photographer who died while documenting 9/11; Christopher is a retired boat builder whose work took him around the world. But their children took a different path.

“Oddly enough, every one of our children went to college. I guess we all realized after the fact how important the college experience really is,” said Burke, now married with one son.

Burke earned her GED at age 50. The following spring, she was delighted when she received her acceptance letter from Fordham. But a month after she received the good news, she learned that one of her sisters was diagnosed with stage four lung cancer.

“She was living with me, and I was there every step of the way. I was holding her hand when she died. To be able to be present like that for someone is amazing,” Burke said. “It changed my whole life. Social work was what happened, and it was beautiful.”

In the fall of 2015, Burke became a student at Fordham. She hadn’t been in a classroom since 1978 and often felt scared and overwhelmed, especially when she received a zero on a test during her first semester.

“People my age who are going back and trying again can get discouraged very easily,” said Burke, who was 52 when she returned to school. “But every step of the way, there was somebody there to help. It made a world of difference.”

This fall, Burke was promoted to clinical social worker at the Mental Health Association of Westchester, where she had served as a recovery specialist for three years. She now works with clients who are struggling with their mental health.

“I’m not fixing or changing anyone. I’m helping people figure out what they need to do for themselves to help them find their way,” said Burke, who, as a recovering alcoholic, is able to empathize with many of her clients.

When Burke was selected as the student speaker for her graduation ceremony this past September, she chose to look back on her time at Fordham. She said she was stunned by one of her first courses, an introduction to social work through a trauma lens—a remarkable reflection of her life.

“I was so taken aback by it: the culmination of my life in print, right before my eyes,” said Burke in her speech. “I was able to process grief and eventually heal, as it validated many of my feelings. It was cathartic and empowering, all at the same time.”

Now, at 59, she says she’s ready to continue helping others find themselves.

“My perspective in the past five years has changed dramatically,” Burke said. “And everything that I’ve learned at Fordham has come into play.” 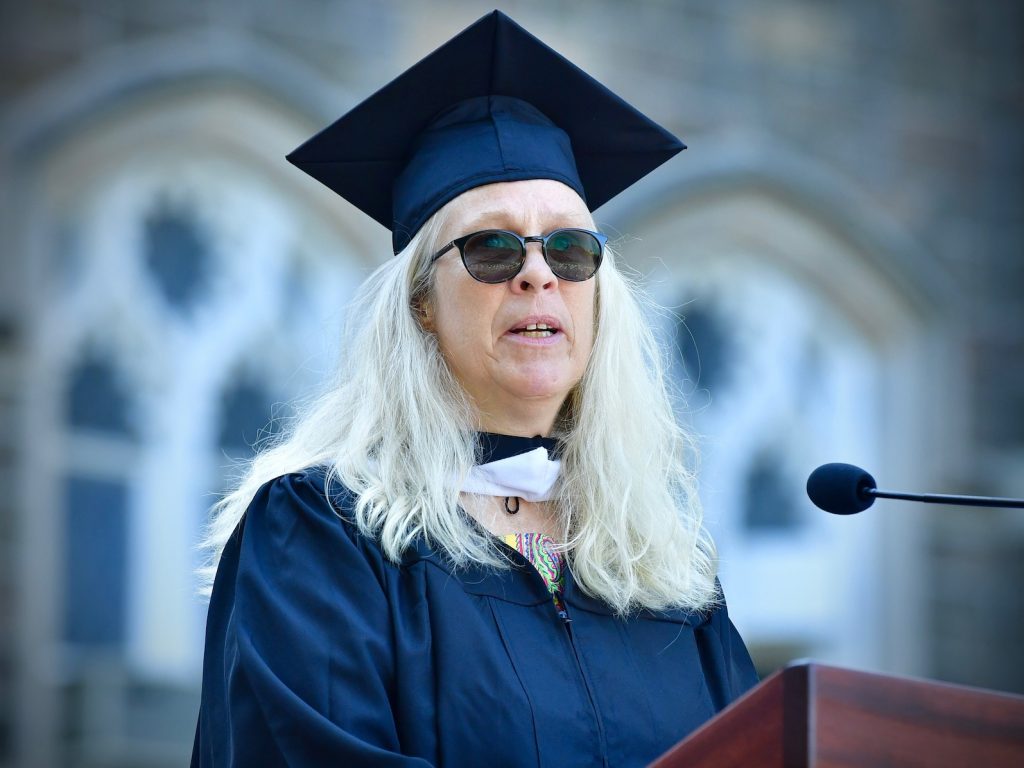 Burke addresses her fellow 2020 graduates and faculty from PCS from the steps of Keating Hall on Sept. 19, 2021.