skip to main content
Return to PCS
You are at:Home»Fordham News»Dean Michael T. Gillan, Champion of Adult Learning and Veterans, Dies at 76

Michael T. Gillan, Ph.D., former associate vice president of Fordham Westchester, former dean of the School of Professional and Continuing Studies (PCS), and co-founder of the FordhamVets initiative, died on May 27 at Montefiore Hospital in Yonkers, New York. The cause was Non-Hodgkin’s Lymphoma, said his daughter Michelle Gillan Larkin.

Gillan Larkin said Gillan lived a “full life” and was beloved by many.

“It may sound like I’m painting a beautiful picture of someone who is gone, or that it’s just his daughter saying it, but everyone who knew him says that he was one in a billion,” said Gillan Larkin. 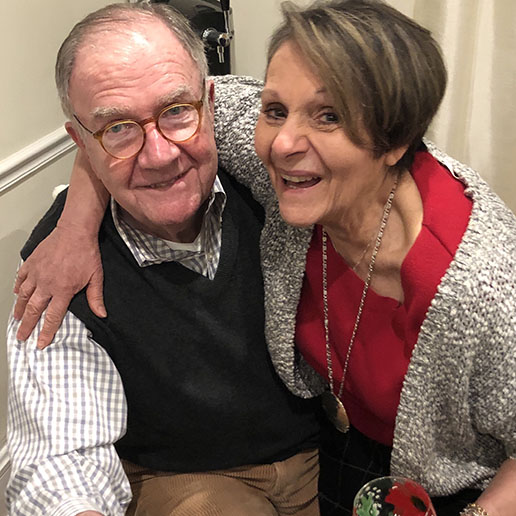 Michael and Paula Gillan met on Fordham’s Rose Hill campus when she was a junior and he was a senior.

Born a mere stone’s throw from what would become Fordham’s Lincoln Center campus, Gillan was as much of a Fordham Ram as one could meet. He met his beloved wife Paula on campus after she was admitted into the first class of Thomas More College. She was a junior and he was a senior. He graduated in 1967, she graduated in 1968, and they were married in 1969. He would go on to get his Ph.D. at Fordham in 1974 from the Graduate School of Education.

Gillan Larkin described her father as a “positive, upbeat, kind, interested, generous, selfless, and patient person.” Indeed, online and on social media, similar tributes have been pouring in from alumni who were touched by a dean that many have described as a consummate gentleman.

Juan D. Y. Gutierrez, PCS ’15, recalled bringing his son to a New York Giants game with tickets donated by Gillan to a FordhamVets raffle. Once at the stadium, Gillan was there to greet them and watch the game together.

“It was the first-ever football game my son and I watched in person. Thank you, Mr. Gillan,” Gutierrez wrote on the University’s Facebook wall.

Throughout his time at Fordham, Gillan had a knack for taking on growth opportunities. He served at PCS when the school was still referred to as Ignatian College and the College of Liberal Studies (FCLS). There, he inspired untraditional students to continue with their studies.

“I was just thinking of him about a month ago and how much he helped me during my time at Fordham,” Lennette Octaviani, PCS ’07, wrote on Facebook. “He was my dean when I was in what used to be Ignatius College. He was truly a great man and I couldn’t thank him enough for all his help. I was able to graduate because of him.”

Gillan’s efforts in Westchester helped further the mission and visibility of the University’s Westchester campus north of the city, said Grant Grastorf, Ed.D., the academic operations administrator there.

“As an alumnus and former dean of FCLS, he strongly believed in a liberal arts education,” said Grastorf. “Many former students frequently stopped by to visit him and he was often writing recommendations to graduate school and jobs.  He encouraged me to get my doctorate as well.  He wanted everyone to succeed.”

His daughter recalled that Gillan was constantly going to a variety of business association breakfasts throughout the county.

“He waved the Fordham flag in Westchester with business people and let them know that Fordham was a presence,” she said. “He was not a morning person, and the business people always have 8 a.m. breakfasts, but he’d go all kinds of things like that.”

Peter Vaughan, Ph.D., the former dean of Fordham’s Graduate School of Social Services, is a Westchester resident who co-founded the FordhamVets Initiative with Gillan.

Today, the initiative has evolved into the Office of Military and Veterans’ Services and has two full-time employees. Matthew Butler, PCS ‘16, directs the office. Butler noted that Fordham was one of the early adopters of the Yellow Ribbon Program (an education benefit offered specifically to eligible veterans and dependents under the Post-9/11 GI Bill) before the red tape between higher education and the Veterans Administration had yet to be untangled.

“The VA is one of the largest bureaucracies there is, so somebody needed to take a leadership position, to put their arms around the complexity of making sure that the benefits were working for the veterans and for Fordham, so that they could concentrate on their studies and not worry about if the paperwork was done properly,” Butler said of Gillan’s role in navigating the complex process. Since the Yellow Ribbon program was adopted in 2009, more than 1,000 veterans have graduated from the University, Butler said.

Gillan also helped the University understand what would be needed to support veterans to make the transition to higher education and integrate on campus.

“The program opened the door to folks like myself to go back to school, who would’ve never been able to afford to come to Fordham or New York City,” said Butler. “But Mike was also aware that we needed to make sure that the veterans felt like complete members of the community. You know, that’s something. That’s a legacy that I continue to build on to make sure that our veterans have all the rights and privileges as full members of the community.”

Vaughan recalled that he and Gillan came up with the idea for the initiative after Gillan had been talking to officials in the state capital about veterans’ education and Vaughan had just returned from a conference held by the VA in Washington, D.C., on the same subject.

“It was almost simultaneously that we said we have to talk about this, and we did, and then we met with someone he knew from the Department of Veterans Affairs with the state, and then we met of course with the then-provost [Stephen Freeman, Ph.D.], then Father McShane, who said, ‘Go ahead.’ And then, as they say, the rest was history.”

Vaughan said over time the two formed a bond over their shared interest in adult learning. He added that Gillan’s efforts helped Fordham build ongoing opportunities for returning students, but he also focused on making sure students got work when they got their degrees. He said the many breakfasts he attended opened opportunities in Westchester business for Fordham graduates. And he made sure that their experience wasn’t merely transactional.

“Separate from an education, because he knew we had a great education, he really wanted our older and nontraditional students to participate in the University in a meaningful way so that their education wasn’t just something that they came and did, but that they really felt that they were a part of Fordham, came back to Fordham, and really let them know that Fordham cared about them. I think Mike carried that forward in ways that were immeasurable.”’

Gillan is survived by his wife Paula, children Kristina Bach and Michelle Larkin, both of Yonkers, as well as grandchildren Reece, Emily, and James. He spent his last few years, as in years past, enjoying the Jersey Shore and cheering on the New York Giants, said Gillan Larkin.

Gillan’s wake was held on May 31 at Westchester Funeral Home in Eastchester, New York, and his funeral Mass was held on June 1 at Annunciation Church in Crestwood, New York.