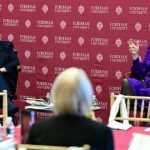 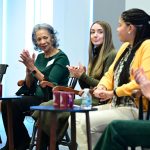 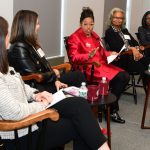 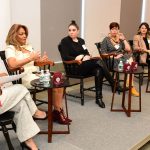 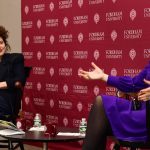 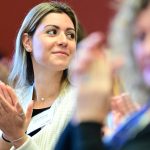 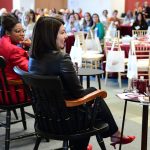 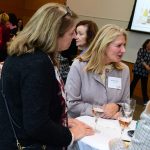 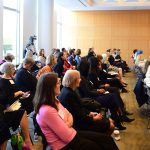 The sixth annual Fordham Women’s Summit, held at the Lincoln Center campus on Oct. 19, featured women leaders who were “firsts” in a variety of fields—the first woman president of Fordham, the first Black woman to serve as the board chair of the Ronald McDonald House Charities, women who were the first to work in the corporate social responsibility field, and women entrepreneurs who were the first to tackle a specific need.

Despite their varied experiences, all of them shared a common desire: They wanted to make sure the doors they opened would stay open for the next generation.

That was one of the lessons that Fordham President Tania Tetlow said she learned from her mentors, Congresswoman Lindy Boggs and Boggs’ daughter, the late journalist Cokie Roberts.

‘Smashing the Door Down’

“She really taught me that when you get to go through a door as a woman, that’s so hard-fought, sometimes there’s this temptation to think that the young women who are coming behind you are whining and they don’t really appreciate what they have and all of that—but she was determined to not just help them through that the door, but to smash the door down,” she said.

The power of mentorship and support also helped Adriana Trigiani, New York Times bestselling author, who led the keynote conversation with Tetlow. She shared three inspiring tips from her own mentor: “You got to pick the thing that you like to do. Then the second thing—you’ve got to be the best at it. And the third thing is to serve humanity.”

During a panel discussion on entrepreneurship, innovation, and transformation, Linda Dunham, PCS ’82, who is the president of Dunham Management Corp., an owner/operator of McDonald’s restaurants, and former chair of the Global Board of Trustees of Ronald McDonald House Charities, described how she put some of those tips into practice when a door opened for her to become the first woman—and also the first Black woman—to chair that board.

“I was proud that I had this opportunity—I just lost my mother and I was thinking, ‘Wow, I wish I could call my mother this morning and tell her I had my first board meeting and yes, I did everything you would have told me to do,’” she said.

Dunham said that she worked to make sure the board addressed critical topics, such as the importance of diversity in the charity and the need for people in leadership to receive the education they needed to excel in their positions. She also made sure that before she left as chair, they identified the next CEO, who was a woman, and the next chair, who was a Hispanic man.

“They continue to this day to make sure we are inclusive,” she said.

Those kinds of efforts are what Tetlow said the Women’s Summit was all about.

“We are here because we keep teaching each other, because we’re so determined to pay [the lessons]  forward to the young women of Fordham and beyond,” she said.

Those efforts have already helped younger women like Nishi Akter, a junior at Fordham College at Rose Hill studying psychology and business administration. Akter and her family moved to the Bronx from Bangladesh when she was 12. 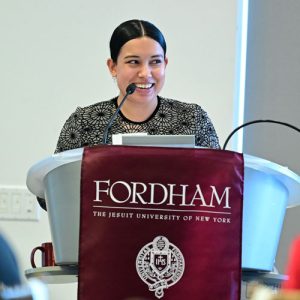 “As we settled in the Bronx, I struggled with the abrupt shift in language and culture while also navigating troubles at home, where money was tight,” said Akter, who also has a speech impediment.

In high school, Akter was placed in foster care, and by her senior year she was in a runaway homeless youth shelter.

“Nevertheless, I was committed to my education, and most importantly, to my 12-year-old self, who didn’t think she could ever break the cycle of poverty,” she said.

She said her dream was to become the first in her family to graduate from college; when she applied to Fordham, she received multiple scholarships to help her get started on that dream. Akter is a Christina Seix Dow Collegiate Science and Technology Entry Program scholar, a Portera Family scholar, and a Loyola scholar.

Akter told the audience she wouldn’t have been standing before them if not for women who had helped her along the way— with financial support, mentorship, and guidance.

“Thank you for continuing to invest in those who have come from nothing, for believing in them, and for giving them a chance to make a difference,” she said, drawing a standing ovation from the attendees.

Finding a Mission with Purpose

That chance to make a difference was what inspired many of the women catalysts for change who participated in the summit, including Kathleen Adams, FCRH ’10, GSAS ’12. Adams is the vice president and digital director ofEvolveMKD, a public relations and digital marketing agency in New York; the co-owner of Angel of Harlem Bar/Restaurant; and co-founder of Momma’s Hip Hop Kitchen.

Adams said Fordham’s commitment to being men and women for others made her think, “How can I be part of the solution?”

“Why don’t we do edutainment—education plus entertainment?” she said, describing the idea behind Momma’s Hip Hop Kitchen, an annual event showcasing female hip-hop artists—especially women of color—and providing a forum for women’s health issues, such as HIV/Aids. “Instead of just pamphlets, people are really leaving the event learning something new, but also getting access to services that they need.”

Being of service to the community is also what inspired Adams to open Angel of Harlem.

“I love being around others, I love hospitality, so it seemed like Harlem had great bars and restaurants, but not a ‘Cheers’ place—your neighborhood bar where you could go and everyone knows your name, so I wanted to create that environment,” she said. “It’s called Angel of Harlem because we want to be the beacon of hope in the community.”

Finding a passion like Adams’ is what Trigiani–author of 18 books and former script writer for The Cosby Show and A Different World—said she hopes for the more than 200 attendees attending the Women’s Summit: that they would walk away with a sense of their own creative possibility.

For Lauren Sweeney, FCRH ’12, that something was the opportunity to make a tangible difference in a field that was a part of her everyday life—food delivery services.

“I was a busy single mom—I was working long hours and relied on the convenience of takeout delivery, and I would order from the same salad place and the same sushi place all the time, and would stand there with my red stout sushi containers, not sure if I could put them in recycling,” she said.

She knew the containers were ending up in a landfill so she thought, “This is a problem I want to solve in the world.”

That was the impetus behind Sweeney’s company, DeliverZero, a platform that allows you to order food from participating restaurants in reusable containers and then return those containers to the same restaurant or others.

“It’s been a bit of a ride—I can’t say that we pressed go in November 2019 [the month the platform launched]with a solution that would scale, but we proved that there is demand for it, and that has instilled a solution that makes it easy for restaurant operators, POS systems, delivery platforms, and customers to all being part of this reuse ecosystem.”

Tetlow emphasized that women leaders need to teach the next generation how to both find a purpose and to learn “effective activism”—how to really bring about meaningful conversation and change.

“How do you really sit at the table with complexity? How do you find a way to turn up the pressure from the outside, but also engage from the inside?” she said. “It’s all of that work, and to find your purpose in life—and we’re not going to tell you what it is, and it will be different across all the diversity, including ideological diversity of our students—but having that vocation in life of that thing that makes you excited.”

Having a company that is aiming to make a difference is essential to this next generation of workers, according to multiple women panelists. Companies that already are or have been doing this type of work, often referred to as corporate social responsibility (CSR), have a leg up, said Alison Whritenour, GABELLI ’11, CEO of Seventh Generation. Her company has been making sustainable products for many years.

“Our founders were lightyears ahead of their time, and really built the business on holding people, planet, and profit at the same time, which really was the inception of CSR,” she said.

In her role as CEO, she said that she strives to make sure they continue this work and that the next generation can see that it’s real and not just a slogan.

“We have a mission to transform the world into a healthy, sustainable, and equitable place for the next seven generations,” she said. “That truly is how we run the business—from decisions that we make in terms of what we put in our products to advocating and using our voice to amplify reasons for change and how we educate consumers.”

Jordan Catalana, GABELLI ’15, said that she was one of the first people who was able to “start their career in CSR as opposed to getting into it from other fields.” Catalana, who is a senior associate for foundation and social impact programs at Tapestry Inc., said that she’s seen the field shift in just the short time since she started in it, which was just out of college.

Catalana, who is also an adjunct at the Gabelli School of Business, said that shift is partly due to consumers, shareholders, and the next generation of employees demanding those things from companies now.

“I think we all really need to hold businesses accountable for driving the changes that we need in the world,” she said.

The Summit also served as a chance to recognize Fordham women who made a difference in the lives of others..