Andrei Markovits, the Arthur F. Thurnau Professor and Karl W. Deutsch Collegiate Professor of Comparative Politics and German Studies at the University of Michigan, published a new memoir on Aug. 19. 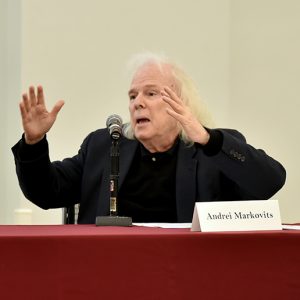 Markovits at a 2019 Fordham event. Photo by Dana Maxson

“The great Jew­ish his­to­ri­an Salo Baron defined the ​’lachry­mose school of Jew­ish his­to­ri­og­ra­phy,’ that long litany of suf­fer­ing and per­se­cu­tion that for many defines Jew­ish life and his­to­ry. Andy Markovits’s mem­oir is the anec­dote to that school: a sun­ny, opti­mistic, and uplift­ing read,” wrote Martin Green, professor emeritus at Fairleigh Dickinson University, in a recent review for the Jewish Book Council. “It doesn’t gloss over the sad­ness of post-War Europe, but it shows how that lost world could pro­duce a vital future and how a state­less, root­less per­son could nonethe­less turn that con­di­tion into a ful­filled life.”

Markovits is a scholar whose work crosses many fields, including German and Austrian politics, anti-Semitism, anti-Americanism, social democracy, social movements, and comparative sports culture in Europe and North America. His book, The Passport as Home, is a reflection of his life as a scholar and beyond. In 2019, Markovits served as a panelist at PCS’s Global Symposium on Sports and Society, where scholars examined anti-Semitism in the sports world.